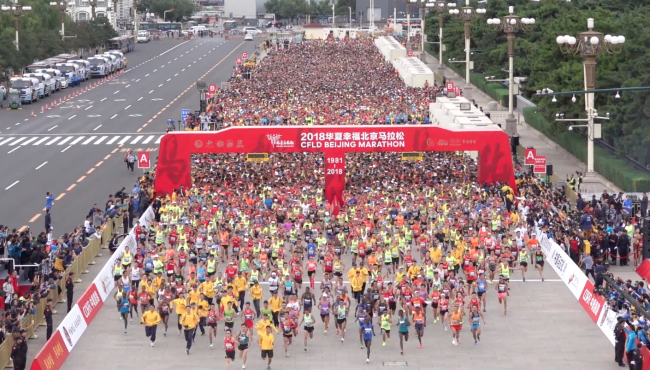 IN BEIJING MARATHON IN 30 THOUSAND ARRIVALS MORE THAN 100,000 QUESTIONS 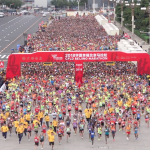 The street from Tian’enmen Square for the 38. Beijing marathon with all the authorities: at the beginning ceremony was the President of the Chinese athletic association Duan Shijie, with the vice minister of the General Administration of the sport of China Gao Zhidan , the deputy mayor of the Beijing municipal government Zhang Jiandong, CCTV deputy editor Peng Jianming, general manager of the Beijing sports office Zhao Wen, president of China Sports Industry Wang Weidong, executive chairman of the China Fortune Land Development Company Wu Zhongbing, representative of the Xie Zhenye athletes. Participant runners and guests joined the Chinese national anthem to signal the start of the Marathon.

2018 is a significant year for this event because it is the tenth anniversary of receiving the Gold Label from the IAAF and the tenth anniversary of the Beijing Olympics. The organizing committee has planned various activities to celebrate the event, such as the roller skating marathon, the exhibition of the Olympics collection and the exhibition of works of art, with the aim of promoting the culture of the Winter Olympics and Games Olympic.

There were 111,793 applications for the 2011 CFLD Beijing Marathon, 30,000 runners from 43 countries participated in the race. An intense race between some of the world’s elite riders. In the end, Dejene Debela GONFA from Ethiopia finally won the men’s race with 2:12:08; Seboka Dibaba TOLA from Ethiopia came second with and Mogos Shumay SOLOMON from Eritrea came third.
Chinese runner Li Zicheng came first among Chinese men with 2:15:53.
In the women’s race, Valary Jemeli AIYABEI from Kenya proved to be the best at 2:21:38, while Eunice Chebichi CHUMBA from Bahrain won second place with 2:26:56 and Fatuma Sado DERGO from Ethiopia placed third in 2:27: 41.

He Yingli was the best Chinese women runner with a time of 2:31:45.