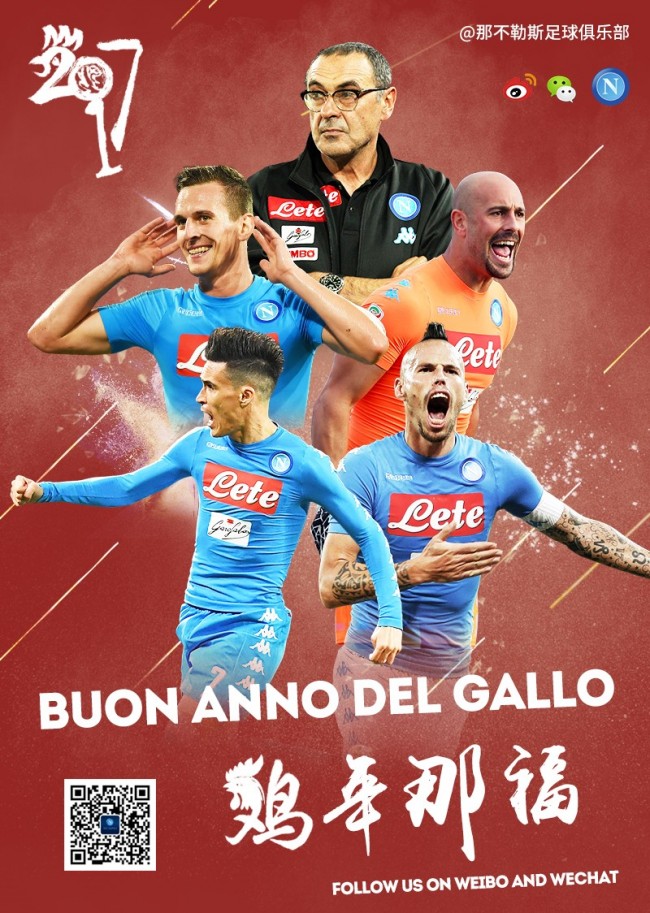 After the opening of the social media channels Weibo and WeChat, Napoli intensifies expansion activity and growth on China, the first step in the international development of the brand. At the Chinese Embassy in Rome, it was held a press conference to present the activities designed from Naples to celebrate the Chinese New Year. On the occasion of this important national holiday Calcio Napoli wanted to send a message of solidarity to their Chinese fans, making a series of activities dedicated to the event. During the match Napoli – Palermo, the team will wear a special limited edition of the game shirt with a patch dedicated to the Year of the Rooster. Before the race, the children who accompany you on the field with the players wearing a red t-shirt dedicated to the event. Special greeting messages will appear on the LEDs on the sideline during the evening. In addition, the Naples dedicated a special rate – with a discount of 50% – to the Chinese fans in Italy, who want to follow the race in Sao Paulo on Sunday evening.
The special jersey worn for the match against Palermo and autographed by all the players will be auctioned to raise funds to support the growth of football in the Chinese territory. A special edition of the race jersey will be available in limited edition at the stores of Naples after the game.
“Napoli looks with great interest to Asia and particularly to China for development of the brand. I am convinced that football in China has an important future and I hope that Napoli can contribute to its success. Happy New Year from me too, of Gallen to the Chinese fans, “said the President Aurelio De Laurentiis. “Football is very popular in China, the Italian is well known since the ’80s when he became the first television broadcast of the World Cup in China. Napoli is one of the most expensive teams to Chinese fans. This Embassy expresses its high appreciation for the initiatives of Naples made on the occasion of Chinese New Year, initiatives that demonstrate the great sympathy and closeness of Naples to our people. We also thank the Italy-China Foundation which has supported the program. We hope that the activities of Napoli can facilitate the integration of football Italian and that of China, and promote friendship and closeness of the two peoples. We join the Naples to wish Happy New Year of the Rooster Chinese fans, “said Chinese Embassy spokesman Zhang Aishan.
“The increasingly close relations that have been created and are being created, between the Italian football teams and China further strengthen more the strong bond that exists between our two countries. As Italy China Foundation we can not but be satisfied and we are always available to support the exchange between Italian and Chinese companies. These initiatives for the Chinese New Year are very positive and we hope that in the future they can be followed by all the Italian teams, “said Margherita Barberis, General Manager of the Italy-China Foundation.
With the opening of its official social channels in China, the Calcio Napoli communicates daily with their followers, with ad-hoc content created with the involvement of the whole team. The collaboration with the Embassy and activities carried out confirm and demonstrate the strong interest of Naples in a continuous presence in China, a country where the demand for sports-football content is continually evolving and growing. Starting from China, Naples intends to assert its brand on the global market to reach their fans around the world.