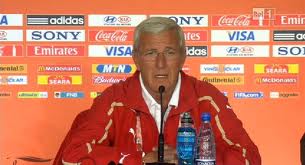 Lippi BACK IN ITALY AND REVEALS: ‘I HAVE REFUSED THE MILAN BUT NOT TELL YOU WHY’

Back in Italy Prize Facchetti, Marcello Lippi, the BBC has revealed some background of his extraordinary career: “Before returning to the National Galliani has given me the Milan bench, but I said ‘I can not’. He asked me why and I kept saying ‘I can not’ and now I can not even reveal why … “.
Conte: “We often talk about, but do not give him any advice. Unfortunately we do not have much choice, because there are teams without a single Italian, even at the Spring, and this is a serious problem. Fortunately, after a bit ‘of time is 21 un’Under valid. ”
On Balotelli: “convene it was a smart decision – approved Lippi – You can not leave out Balotelli, a heritage of Italian football, only because they did not do a good World Cup. Anthony did not know him and had a duty to evaluate, because there are players with a coach giving 30 percent and the other 80 “.
Lippi quits talking about the future: “I know myself and I know that when I leave China after a couple of months I will again feel like football. But I would accept only the bench of another National, preferably European. Also because I have participated in all the events, but never to a European … “.