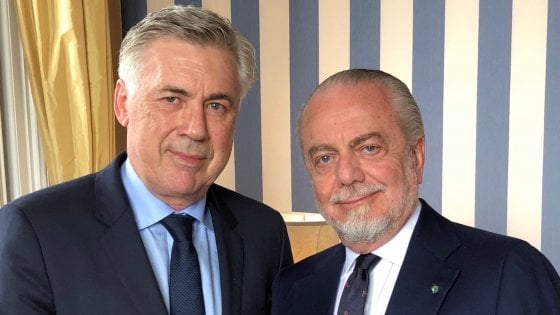 CARLO ANCELOTTI IS THE NEW TRAINER OF NAPLES, ANNOUNCEMENT OF PRESIDENT DE LAURENTIIS

Now it’s official. Carlo Ancelotti is the new coach of Napoli: he has signed a three-year contract and will take the place of Maurizio Sarri. Here is the note published on the site: “The Naples is pleased to announce that it has defined an agreement with the coach Carlo Ancelotti concerning the technical guidance of the First Team for the next three seasons and then from 2018-2019”.
In the afternoon Aurelio De Laurentiis, on Twitter, greeted and thanked the now former coach of Naples. “I thank Maurizio Sarri for his precious dedication to Calcio Napoli which has allowed to give the city and the blue fans all over the world prestige and emotions, creating a model of play admired everywhere and by anyone.” Maurizio Bravo “, writes the number 1 of the blue club.
Sarri also greeted the fans through the official facebook account. The first post dedicated it to the fans and to the City of Naples. the second to President De Laurentiis. Here is the text:
“Everything has a beginning and everything has an end: As already said in public it is better to finish things when they are still beautiful so as not to risk them becoming ugly.They have been wonderful years, we have done extraordinary things and all this thanks to you. I always cried and sustained these colors: this is my land, here are my roots, here is where my heart will always remain.There will not be any places where I will be able to experience the emotions that only Naples can give, a city ​​with a million contradictions, but always the most beautiful city in the world “. And then: “The words spoken by President Aurelio De Laurentis for me are of great importance, it gave me the opportunity to express the football I wanted without ever getting into the merits, I had the chance to grow as a coach by being part of important scenarios In over 10 years he has led this club to compete with the greatest teams and still has a great desire to do well because he loves Napoli and above all he loves Naples I am sure that as long as there is this leadership the satisfactions will never fail. Aurelio “.