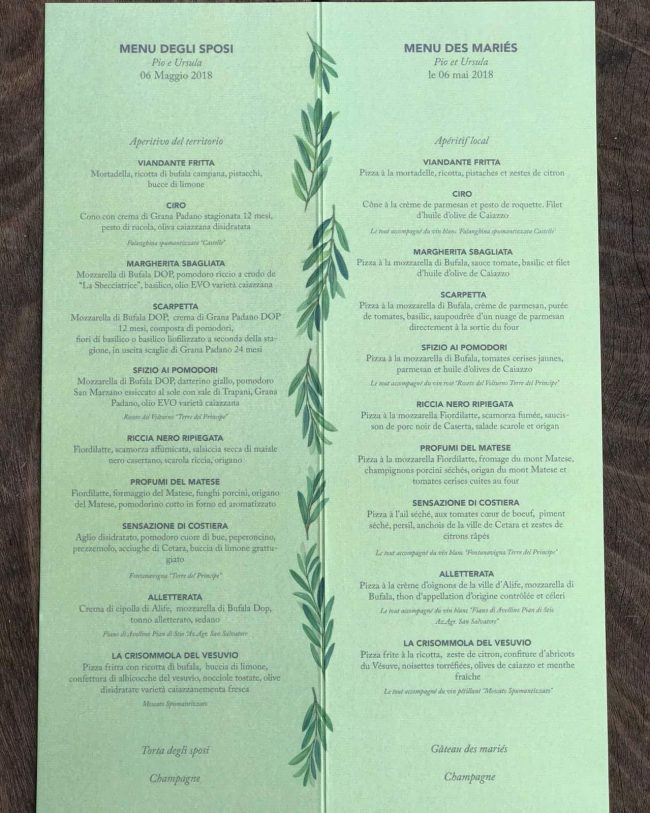 FROM PARIS TO CAIAZZO TO WEDDING IN THE ‘KINGDOM OF PIZZA’

They were the love for pizza by Franco Pepe, Caiazzo and the territory of the high Caserta to inspire the two boys of Paris who three years ago visited the village to taste Franco’s pizza and fell in love with it. The spouses, 28 years old Ursula, Parisian doc and 29 years old Pio, Italian who settled in Paris for some time, then chose Caiazzo to celebrate their wedding last Sunday and reserved exclusively the 18th century palace of Pepe in Grani for the wedding reception .
Ursula and Pio have pronounced the fateful “yes”, in the millenary church of San Pietro del Franco, the oldest of Caiazzo, surrounded by the affection of 130 relatives and friends, partly celebrated in French. And the choice of Pepe in Grains as the venue for the wedding banquet is also out of the ordinary, to amaze and delight the refined palates of the guests.
“For me it is an emotion and an honor that Ursula and Pius have involved me and Caiazzo in organizing their wedding and I hope that all the guests bring home the unexpected beauty of our places and the unique goodness of our products”, said Franco Pepe, who has studied a menu entirely dedicated to the territory. Aperitif based on local cheeses, meats and vegetables, offered by its producers and, then, ten pizzas-symbol of Franco Pepe that transmit, with their aromas and authentic flavors, the essence of the hills of the high Caserta area and matese . Just to name a few: Margherita wrong, with curly tomato raw from “La Sbecatrice”; Curly black curly, with dry sausage from Caserta black pig; Matese perfumes, with Matesini cheeses and oregano; Alletterata, with cream of onions Alife and tuna alletterato. Unique and inevitable concession to France will be the final toast, based on Champagne.