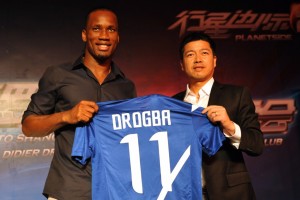 DROGBA WONT GO TO JUVENTUS UNTIL JUNE. THE OLD LADY CAN’T PAY BECAUSE THE SHANGHAI SHENHUA

Didier Drogba, Chelsea’s former striker, will continue his adventure at the Shanghai Shenhua at least until next June: the news bounces from China. Ivorian striker who would dream of Antonio Cnte for the moment will not be achievable. It is the focus of numerous market rumors linked to rumors of bickering and financial crisis of Shenhua to a couple of months ago but was denied the opportunity to leave from his new club in the January transfer window. Drogba earns In China over 10 million per year salary that Juventus would not be able to pay. So for now nothing Chinese dream.