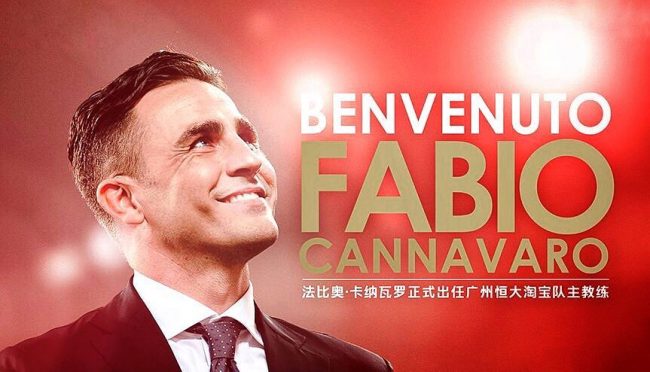 CANNAVARO FABIO BACK ON THE GUANGZHOU EVERGRANDE BANK

She is now official. Fabio Cannavaro is the new coach of Guangzhou Evergrande. The Chinese club officially announced the arrival of the Italian coach with a “Welcome Fabio Cannavaro” but, in fact, is a return since the former captain of the 2006 World Cup national champion had already led the team in 2014-2015 before being released, despite top ranking, to make room for Luiz Felipe Scolari. A nice replacement for Neapolitan who took the place of the Brazilian coach and deserved the call after having played a big league with Tianjin Quanjian, the team who first brought B from the top division to lead him to qualifying for next Asian Champions League. Cannavaro, 44, is back on the bench of China champions, while in his place at Tianjin, there will be the former technician of Fiorentina, Portuguese Paulo Sousa.
Satisfaction and pride for Fabio Cannavaro: “The long-term project of the Evergreen is very fascinating to me, and I am happy to be able to work with them.” We will cultivate as many young talents as possible and I am really proud to return to Guangzhou and grateful for the opportunity – added Instagram – I’m looking forward to next season’s success. Never say goodbye. “