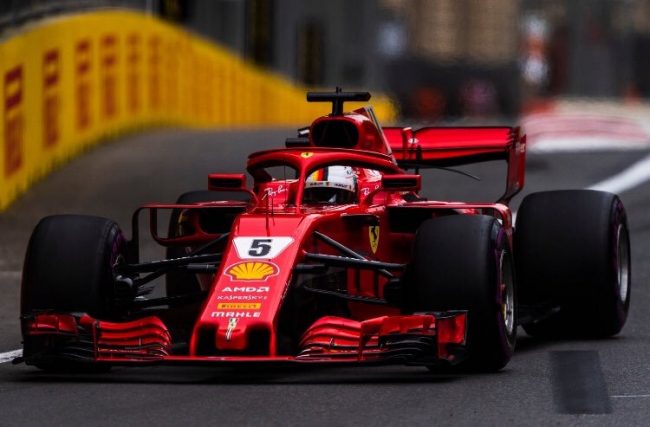 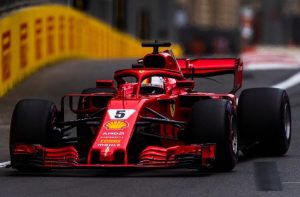 Sebastian Vettel is in the third pole position over four races. In Baku, in the Gp of Azerbaijan, he is the man to beat. The German of Ferrari starts immediately very strong, keeping the head of the standings, holding behind the Mercedes of Lewis Hamilton and Valterri Bottas. Race interrupted after the first lap due to an accident involving Kimi Raikkonen. With the track debris contaminated, the restart is with the Safety Car. When the Safety Car is back, Vettel is always in the lead. Behind it is a tussle especially between the two Red Bulls, with Verstappen and Ricciardo overtaking each other. Sebastián Vettel with his Ferrari makes a race to himself, keeping the head of the race with ease, stretching out on the Mercedes. Behind Raikkonen forced to change rear wing and tires for the incident on the first lap is forced to a race of pursuits that the Ferrari driver does with great patience and excellent results by climbing position on position. The two are doing the show on the track
Red Bull riders with heartbreaking overtaking and counterspaces. In the lead the race of the two Mercedes is on Vettel that tries to win also at Baku and to increase its leadership in the drivers’ classification. At lap 40 usual Verstappen, even if he does not pass Ricciardo, changes direction several times and forces him to impact. The Red Bulls are out. The Safety Car enters. It will recover with Bottas in front but without having made an out stop, behind Vettel. Bottas starts very strong, Vettel tries to overtake but he can not and is also surpassed by Hamilton and Raikkonen. Shot of scene on lap 49 with Bottas drilling and being overtaken by Hamilton who takes the lead. Raikkonen behind him. Upon arrival Hamilton wins in front of Raikkonen. Only fourth Vettel who had done a whole race in the lead.