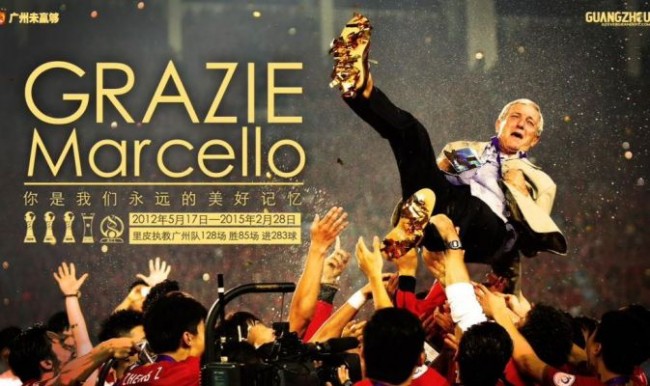 MARCELLO LIPPI WELCOMES CHINA AND THE GUANGZHOU. TIME TO RELAX IN ITALY

Marcello Lippi leaves the bench Guangzhou Evergrande after three consecutive league titles and a Champions Asian. The former head coach of the World Champion in 2006 said just after he had left the bench last November club (now occupied by Fabio Cannavaro) remaining in the company as technical director. At the origin of the break there would be differences with the ownership of Guangzhou, in particular on market choices. Instead remain firmly at the helm of the team Cannavaro.
“After three years beautiful and intense are a little ‘tired: I need to go home.” Marcello Lippi, the phone with the ANSA says her final goodbye to Guangzhou. It reveals that in its desired there is’ a national. “Now rest a bit ‘, but if I had the chance to drive a national’d be glad: for making the European, that I have never played … Surely not accept to coach a club, if anything, a role to technical director.” First, however, “a rest home, in Italy,” assures Lippi.