MILAN FOR SALE? IN POLE FOR THE PURCHASE OF THE CHINESE Guangzhou Evergrande Marcello Lippi

Berlusconi denies , but the well-informed revived : “Milan is on the market .” The news in the air for some time , and was relaunched by ‘ financial agency Bloomberg , which cited three sources. The American company , owned by former New York City mayor , he also explained that the prospectus for sale to potential customers would already be in the hands of the French investment bank Lazard , the same who managed the handover of ‘ Inter Milan Moratti to Indonesian Erick Thohir , in business with Mediobanca and their shareholdings in Mediolanum. According to Bloomberg the value of AC Milan is around EUR 600 million , the figure quoted by Forbes magazine that makes Milan one of the six most valuable football clubs . In fact, as in the case of negotiations for Inter, then there is need to consider the debt situation , which is quite heavy 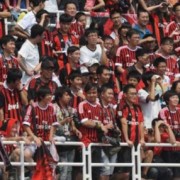 The name is warm is that of Evergrande Real Estate , owned by tycoon Xu Jiayin , the fifth richest man in China with a fortune estimated at around 6 billion. Guangzhou Evergrande is the owner of the football team climb to the headlines before with expensive purchases , such as the Brazilian Basin , according to salary only to Messi , Ronaldo and Eto’o , and then with the hiring of coach Marcello Lippi, with whom he won the title and Asian Champions . Already last year, through the offices of Davide Lippi, son of the coach world champion with Italy in 2006, attorney and former man of Gaea, had started the first contacts between representatives of Berlusconi and Yongzhuo Liu , chairman of Guangzhou. To close the circle that the merchant bank Lazard , which according to Bloomberg Fininvest would have given the mandate for the sale of AC Milan, as he had found the first potential buyers Inter just the Chinese of the China Railway Construction Corporation. Then the deal fell through and came Thohir