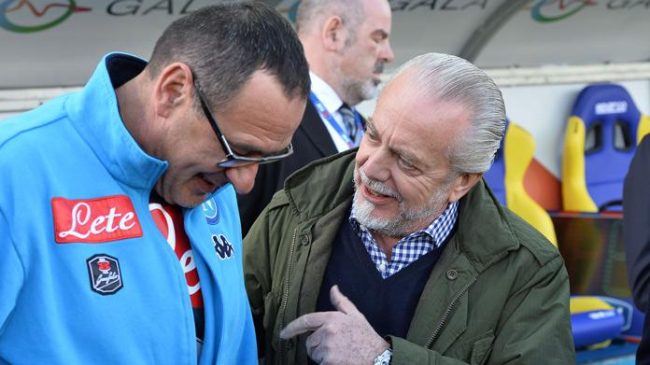 SARRI IS TAKING TIME, DE LAURENTIIS DOES NOT WANT TO EXPECT SO MUCH, THE BEL NAPOLI IS LOSING TO DISAPPEAR

Maurizio Sarri is considering what to do with his family. On paper he has a contract that binds him to Naples for the next season. It can only go away if there is a team willing to pay the Naples a rescission clause of 8 million euros. Only in this way Sarri can leave Naples and sign a contract with another club. The numbers to be spent on securing Sarri indicate that only a top club can afford such an expensive outlay of money. Or a Chinese club. In any case to want to be serious we must think that Sarri is required by another team and for this reason is thinking about it. What could make Sarri change his mind and still stay in Naples? Because it is useless to turn around, Sarri can even leave. It would remain in Naples under some conditions. Moreover, I have already referred to Aurelio De Laurentiis several times this season. What are these conditions? First: do not start the top players, except there are no amazing economic offers and the pleasure of leaving the player. An example above all: Koulibaly is required by the PSG, the French are willing to pay in the coffers of Naples 80 million and the Senegalese champion residing in France is pleased to leave? Done deal. But then we need to invest the fresh capital on at least two top multirole or multitasking players and other good young players who can be bred and educated to the technical verb of Sarrismo. Aiming for other resources or putting a serious project on black and white for the launch of a technical and sports center at the level of football rank reached by Naples: so not the structure of Castelvolturno. Last but not least, to really cure the nursery and integrate it into the technical and sports structure of the first team. Any possible reasoning on the future of Naples, however, is currently blocked on the choices that Sarri will make. Before deciding Sarri, first we will know what will happen to Naples next season. Will Aurelio De Laurentiis be willing to wait for Sarri again? And above all, will it be willing to support, even within budget limits, those that are almost imperative demands of Sarri to cultivate dreams of the championship next year? The environment, the fans are on the side of Sarri, would like to see him in Naples to complete the cycle started with the boys who this year have touched the Scudetto. In fact, it was not enough to win it.