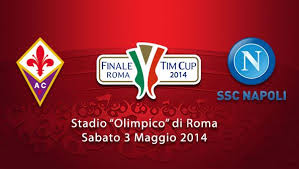 AROUND THE WORLD ON TELEVISION FOR FIORENTINA NAPOLI. THE FINAL WILL BE TRANSMITTED IN MORE THAN TWO HUNDRED COUNTRIES

Extraordinary interest by television to the Italian Cup final between Napoli and Fiorentina. The challenge takes place tomorrow evening at the Stadio Olimpico in Rome, will be followed by millions of viewers around the world. There were over two hundred countries around the world interested in the signal, with coverage for all 5 Continenti.Tra nations that have requested access to the signal, even very distant countries or just inserted into the channels of television sports, such as Southern and French Antarctic, Equatorial Guinea, Greenland, the Marshall Islands, Mayotte, New Caledonia, Saint Eustatius, Saint Helena Island, Vanuatu, Wallis and Futuna and Zanzibar. He asked the signal even Syria and China.